ios - How do I animate constraint changes?


Top 5 Answer for ios - How do I animate constraint changes?

I appreciate the answer provided, but I think it would be nice to take it a bit further.

The basic block animation from the documentation

but really this is a very simplistic scenario. What if I want to animate subview constraints via the updateConstraints method?

An animation block that calls the subviews updateConstraints method

The updateConstraints method is overridden in the UIView subclass and must call super at the end of the method.

The AutoLayout Guide leaves much to be desired but it is worth reading. I myself am using this as part of a UISwitch that toggles a subview with a pair of UITextFields with a simple and subtle collapse animation (0.2 seconds long). The constraints for the subview are being handled in the UIView subclasses updateConstraints methods as described above. 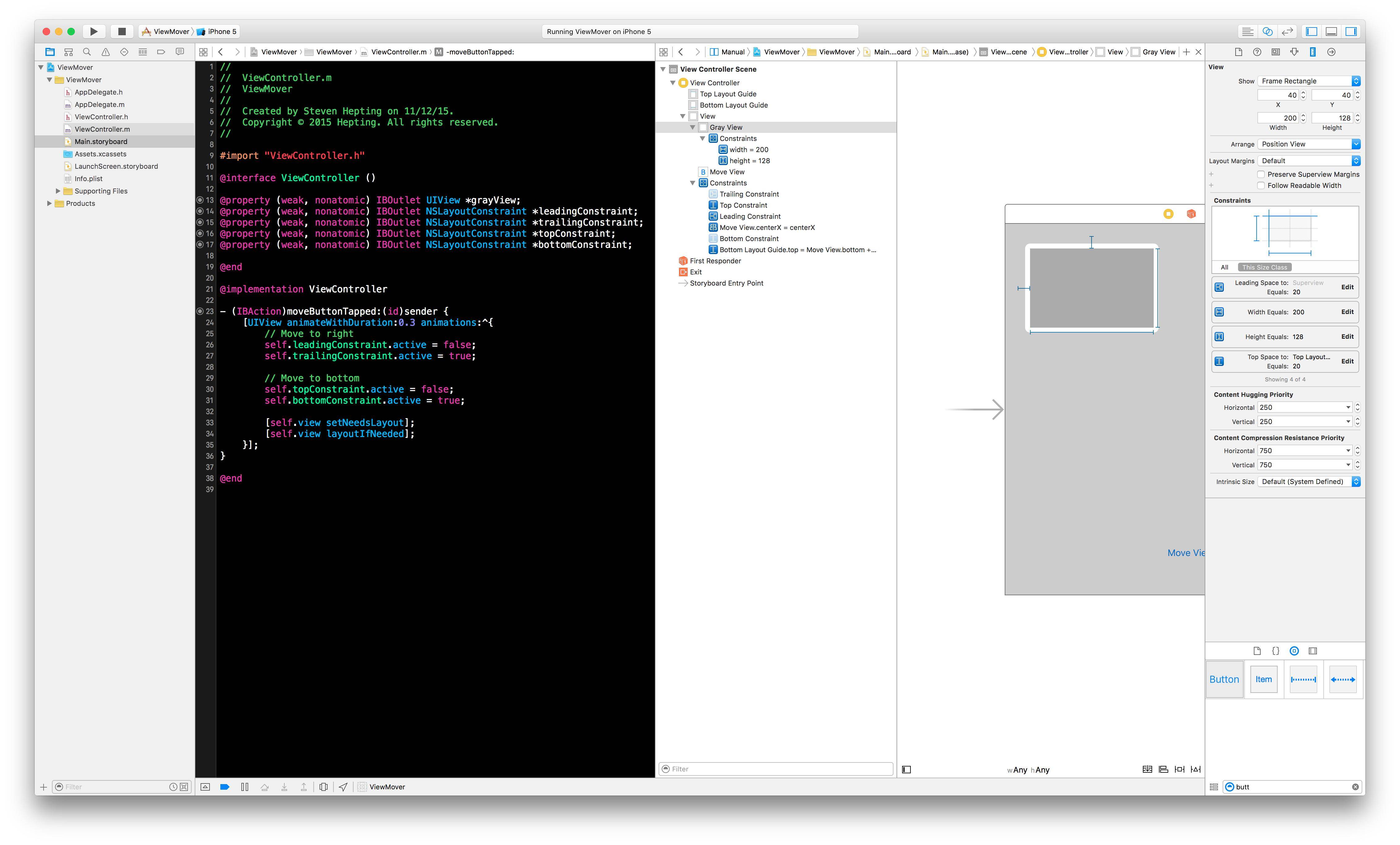 There are some questions about whether the constraint should be changed before the animation block, or inside it (see previous answers).

The following is a Twitter conversation between Martin Pilkington who teaches iOS, and Ken Ferry who wrote Auto Layout. Ken explains that though changing constants outside of the animation block may currently work, it's not safe and they should really be change inside the animation block. https://twitter.com/kongtomorrow/status/440627401018466305

Here's a simple project showing how a view can be animated. It's using Objective C and animates the view by changing the .active property of several constraints. https://github.com/shepting/SampleAutoLayoutAnimation

There is an optional 0th step - before changing the constraints you might want to call self.view.layoutIfNeeded() to make sure that the starting point for the animation is from the state with old constraints applied (in case there were some other constraints changes that should not be included in animation):

Since animator is an encapsulation of the animation, we can keep reference to it and call it later. However, since in the animation block we just tell the autolayout to recalculate the frames, we have to change the constraints before calling startAnimation. Therefore something like this is possible:

The order of changing constraints and starting an animator is important - if we just change the constraints and leave our animator for some later point, the next redraw cycle can invoke autolayout recalculation and the change will not be animated.

Also, remember that a single animator is non-reusable - once you run it, you cannot "rerun" it. So I guess there is not really a good reason to keep the animator around, unless we use it for controlling an interactive animation.

Top 3 video Explaining ios - How do I animate constraint changes?

ios - Vertically align text to top within a UILabel
ios - What's the difference between the atomic and nonatomic attributes?
ios - How can I make a UITextField move up when the keyboard is present - on starting to edit?
ios - Using Auto Layout in UITableView for dynamic cell layouts & variable row heights
ios - Transport security has blocked a cleartext HTTP
ios - Passing data between view controllers
How can I check for an active Internet connection on iOS or macOS?
ios - How do I sort an NSMutableArray with custom objects in it?
ios - performSelector may cause a leak because its selector is unknown
ios - Xcode - How to fix 'NSUnknownKeyException', reason: … this class is not key value coding-compliant for the key X" error?
ios - How do I check if a string contains another string in Objective-C?
ios - How can I disable the UITableView selection?
ios - How can I develop for iPhone using a Windows development machine?
xcode - How to change the name of an iOS app?
swift - How to change Status Bar text color in iOS
ios - Constants in Objective-C
ios - How do I animate constraint changes?
ios - How do I convert an NSString value to NSData?
ios - Xcode error "Could not find Developer Disk Image"
objective c - How to check iOS version?
Xcode 7 error: "Missing iOS Distribution signing identity for ..."
ios - Get the length of a String
ios - Loaded nib but the 'view' outlet was not set
ios - Xcode process launch failed: Security
ios - Can I embed a custom font in an iPhone application?
ios - How do I create delegates in Objective-C?
ios - How do you trigger a block after a delay, like -performSelector:withObject:afterDelay:?
ios - Split a String into an array in Swift?
ios - Eliminate extra separators below UITableView
ios - Placeholder in UITextView